The inspiration for the Arabian Breeders World Cup can be traced to the hearts of several American breeders, and their love for the Arabian horse. They happened to be attending a European horse show that was more than a competition – it was a celebration – and the joy and the excitement they experienced as they watched the horses presented was… inspiring. One breeder said to the others, “ I wish we had a show like this in the United States.” 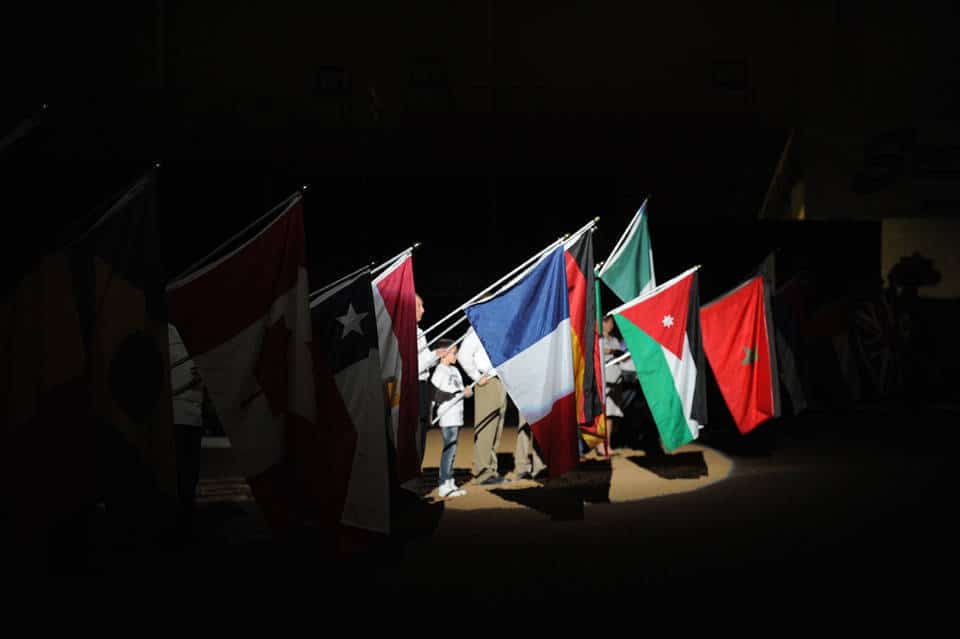 The simple act of voicing this thought was like planting a seed in fertile soil. The wish quickly turned into a dream, and the dream became a vision – a vision that was shared by a group of inspired, committed and dedicated people who were not afraid of the work that was necessary to turn their vision into reality.

The vision this group shared was to create an event by breeders and for breeders of purebred Arabian horses. It would be an event where people from around the world could come together to share their ideas, goals, and accomplishments; as well as to celebrate the beauty and character of the Arabian horse. They agreed on their vision and set out to make it a reality. In order to do this, they sought the support of the international Arabian horse community. They knew it would take the support of many people to accomplish this ambitious goal. The inspiration and enthusiasm of this core group was contagious and everywhere they took their message, it was met with equal excitement – almost.

A few people were doubtful that is was possible to create an international event here in the United States. They did not believe that breeders from other countries would bring their horses to America to compete in a small, new show. They were wrong. The international Arabian horse community has embraced and supported the Arabian Breeders World Cup (ABWC) from its inception and they continue to be among the show’s biggest supporters.

The first ABWC was held in 2007. The venue for the show was the South Point Resort & Casino in Las Vegas, Nevada. The organizers selected Las Vegas as the host city because they wanted an event that was glamorous and exciting. Las Vegas has certainly provided that excitement factor and the South Point, with its fantastic equine facilities, has proven to be the perfect venue. The organizers selected an internationally acclaimed group of judges for the first World Cup, and I believe selecting the right set of judges laid the foundation cornerstone for the success of this show. In addition to the fantastic organization of the event, the group also tapped into their creative genius to transform the arena into the most beautiful and elegant atmosphere ever seen at an American horse show. The crowning glory were the beautiful horse that the breeders and owners brought to compete.

The first show was somewhat small, but truly international and totally exquisite. Some people were in a wait and see mode; they wanted to wait and see how the show was received before they gave their stamp of approval. After the first show, the organizers asked for feed back from participants. It was not a request for compliments or accolades – although there were many of those – it was to find areas that participants felt could be improved. The organizers asked for feedback, they listen, and then they responded. One of this group’s strengths is their open-minded attitude, which serves them well in their efforts to achieve excellence in every facet of the event.

Creating a world-class extravaganza like the Arabian Breeders World Cup did not happen overnight. It has taken the hard work and resources of very dedicated people to accomplish this lofty goal. Yet, each year there is a noticeable improvement, or addition, in some significant area. Their innovation has become a standard in one particular area – the creation of the “World Cup Scoring System”. This model is a modified version of the European point system. The critical difference is the evaluation categories: 1) Type, 2) Head, 3) Neck and Shoulder, 4) Body and Topline, 5) Feet and Legs, and 6) Movement. The judges who have used this model over the past five years have universally agreed that it is the best system they have ever used and they have commented that they would like to see this model used at other shows as well.

The first two years of the show confirmed the desire of breeders and owners to participate in an international level event dedicated to purebred Arabian halter and breeding horses. The level of quality in the horses brought to the show was everything the organizers had hoped for – and more! Initially, the World Cup offered classes much like other American shows with qualifying classes for the different age groups, as well as Junior and Senior Championships. In 2010, the fourth year of the World Cup, the organizers responded to the overwhelming quality of the horses being presented and expanded their awards to include Gold, Silver, and Bronze Championships, a full Top Ten, and a separate Yearling Championship for this, the largest division of competition at the show. The Junior Championships are for horses three years and under, and the Senior Championships are for horses four years and older.

The World Cup began as a forum for breeders. The group’s goals were, and continue to be: to create an atmosphere of generosity and sharing, to acknowledge and reward the efforts and achievements of breeders, and to encourage breeders to continue to strive for excellence in their efforts. As the group looked for ways to accomplish these goals, they studied other successful models. They decided to initiate a Stallion Service Auction and a Breeders World Cup Futurity. The first World Cup Futurity classes for yearlings were held in 2009. In 2011, the Futurity was expanded to include Two-Year-Old classes. These classes were similar to the Scottsdale Signature Auction Classes; only the foals resulting from a stallion service purchased through the World Cup Service Auction were eligible to participate in the Futurity classes. One of the newest expansions to the World Cup is the addition of the Legacy Futurity. These classes will be for the offspring of a nominated mare and a World Cup nominated stallion whose breeding service was purchased outside of the World Cup Auction. This means that even more horses, sired by World Cup nominated stallions, will be eligible to compete for prize money at this fantastic show. The first Legacy Futurity classes will be scheduled for 2013.

Best of all – the Arabian Breeders World Cup is a family friendly event that is completely free and open to the public. This allows everyone to celebrate the beauty, the history, and the mystery of the Arabian horse and be inspired to follow their dreams!

Thank You To Our Sponsors

Board of Directors & Founding Members