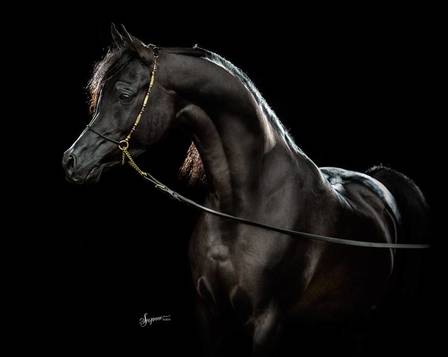 Our magnificent black champion ArtemasGA, sired by "The Facemaker" JJ Bellagio, is a delight to witness. His exquite eyes and gorgeously sculpted visage introduce this important colt who scored all 20's for face when he won the 2015 Arabian Breeder's World Cup Silver Champion Colt in Las Vegas. This black beauty had his show debut in Scottsdale where he was awarded the 2015 Scottsdale Yearling Colt Championship. In the spring of 2015, this American colt moved from Scottsdale, Arizona to Europe to compete with the world's best Arabian horses. At the 2015 Mediterranean & Arab Countries Arabian Horse Championship in Menton, France 2015 he was 3rd among the spectacular yearling colt class and was awarded the prestigious "Most Beautiful Head" Award. Later that summer at the Arabian International Horse Show in Strohen Germany, he was crowned Gold Champion in the Junior Colts Championship. Despite his young age, Artemas has a magnetic and magnificent presence, strong conformation, as well as a heritage of excellence. He achieved a Top Ten title at the 2015  World Championships in Paris, France.