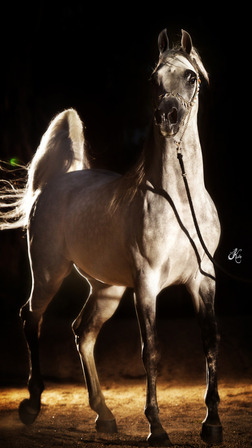 Armir is one of the most beautiful and charismatic young stallions in the United States today. Only shown twice to date he has garnered a 2011 US national top ten futurity colt championship and was just named 2012 Scottsdale Bronze International Champion stallion. He is sired by Las Vegas world cup champion, Arbituer and out of a 3/4 sister to the beautiful Triple Crown winner, WN Ultimate Star. Armir's pedigree consists of extreme beauty which is sought after around the world, along with the beauty comes amazing athleticism, tail carriage and charisma.