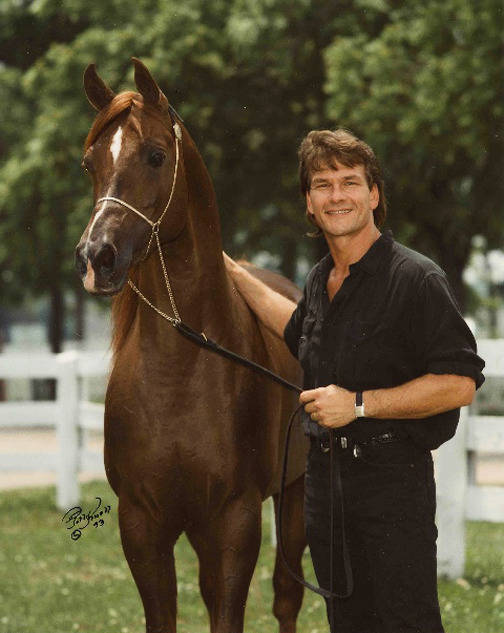 Late in the evening of Monday, September 14th, I was working on my computer. I went to the internet in search of some data about an Arabian horse and I saw the news headline, “’Dirty Dancing’ star Patrick Swayze dies at 57”. It stopped me cold. I sat for a moment and then I turned off my computer – I had had enough. I went out and sat on the patio, I looked up at the stars in the black, velvety sky and thought to myself, the Arabian horse, and the people of the Arabian horse industry have lost a dear friend.

To the majority of the world, Patrick Swayze was best known as a movie star, and for his dramatic parts in the box-office hits; “Dirty Dancing”, “Ghost”, and the epic mini-series, “North and South”. Less epic, but equally memorable were his appearances on Saturday Night Live, and the unforgettably funny “Chippendale” skit he performed with the late Chris Farley. It was nothing short of hysterical. The list of Swayze’s movies goes on and on, and although they were quite diverse in subject – ranging from “Road House” and “The Outsiders”, to “To Wong Foo, Thanks for Everything! Julie Newmar” – there was a common element in each one of them. It seems to me that Patrick Swayze always played characters that were genuine and true to themselves, men who we would have liked to have had as friends; men with hearts and souls.

At the 2009 Arabian Horse Breeder’s World Cup Championship, the crowds were given a special opportunity. As a special surprise to those attending the show, a live conversation with Patrick Swayze and his beloved wife, Lisa Niemi, was broadcast into the show arena. We listened to Patrick and Lisa as they told everyone how much they were enjoying the live feed of the spectacular, Las Vegas horse show right in the comfort of their home in California. Patrick sounded so strong, upbeat and positive. He never mentioned his struggle or his pain. He just said how much the horses meant to him; how much joy they brought him; how much he and Lisa loved the horses and how much they appreciated everyone’s thoughts and prayers. When the crowd was asked to show their appreciation for Patrick and Lisa and to send them their best wishes, the applause and cheers were off the meter.

During that conversation, Patrick was asked about his favorite horse, or his favorite memory of an Arabian horse, and of course he said his favorite horse was his brilliant chestnut Arabian stallion, Tammen (Abenhetep x Talgana by *Talal). Patrick Swayze and Tammen were an iconic team. It seemed like Tammen was Patrick’s equine twin, and Patrick was Tammen – but in human form. They were both very handsome, powerful, and athletic. They were also unquestionably masculine, and yet extremely graceful. They had an air of assurance, but never arrogance. When you looked into their eyes, you saw their spirit, and you felt their charisma.

When Patrick and Lisa attended horses shows they were unassuming – Patrick just wanted to be accepted as a fellow horseman and Arabian enthusiast. Few people knew just how accomplished a horseman Swayze really was, and of course he was never one to boast about it. He could often be seen wearing a tee shirt, blue jeans, and cowboy boots as he swept the alleyway of the stables or shared some good humor with Lisa and their friends, Tom and Rita McNair. Patrick and Lisa purchased Tammen from the McNairs in 1991 and Patrick showed Tammen many times. They won their share of ribbons when they showed at Scottsdale, and at the big Region IX show in Dallas/Fort Worth. They also attended the Pyramid Society’s Annual Egyptian Event if Patrick’s work schedule would allow. Regardless of where Patrick and Tammen showed, you could tell that it was not about winning a ribbon – it was about them working together as a team. They were wonderful ambassadors for the Arabian horse breed.

Tammen was not the Swayze’s first Arabian horse. Patrick had been associated with horses throughout his life, which explains his high level of horsemanship. Legendary Arabian horse trainers and breeders Tom and Rita McNair were friends with Patrick’s father; Jesse Wayne Swayze, a cowboy and trained engineering draftsman, and Patrick’s mother; Patricia "Patsy" Swayze, a choreographer, dance instructor, and dancer; when Patrick was growing up in Houston, Texas. Patrick followed in his father’s footsteps and was active in the rodeo scene when he was in his teens. However, his mother seemed to have her share of influence in the young man’s life too. At the same time he was working on his calf-roping skills, Patrick also studied ice skating, classical ballet, gymnastics, and acted in school plays. In 1972, Swayze moved to New York City to complete his formal dance training at the Harkness Ballet and Joffrey ballet schools.

Swayze's performing career, which spanned some 30 years, is well documented. It earned him the status of “Super Star” and even included the title of People Magazine’s, “Sexiest Man” award. Along with all the Hollywood fame came pressure and to escape that toxic scene Patrick and Lisa would retreat to their California ranch and their treasured Arabian horses. There the Swayze’s enjoyed the simple pleasures of caring for and working with their horses and riding them along the plentiful mountain trails near their home. Patrick Swayze had his share of life’s difficulties and challenges, but he often credited his relationship with his Arabian horses for helping to keep him grounded.

It seems the only thing Patrick Swayze loved more than Arabian horses, was his beautiful wife, Lisa Niemi. The couple met as teens in 1970 when they were both taking dance lessons from Patrick’s mother. The couple married in 1975 and remained devoted to each other for over 30 years, until Patrick lost his battle with Pancreatic cancer on Monday, September 14th, 2009. Lisa Niemi was always there to support Patrick at the horse shows, and that support was visible until the very end. We wish Lisa the very best, we send her our condolences and gratitude for sharing her wonderful husband and their love of the Arabian horse with us all.